You are here:
General NewsRacing 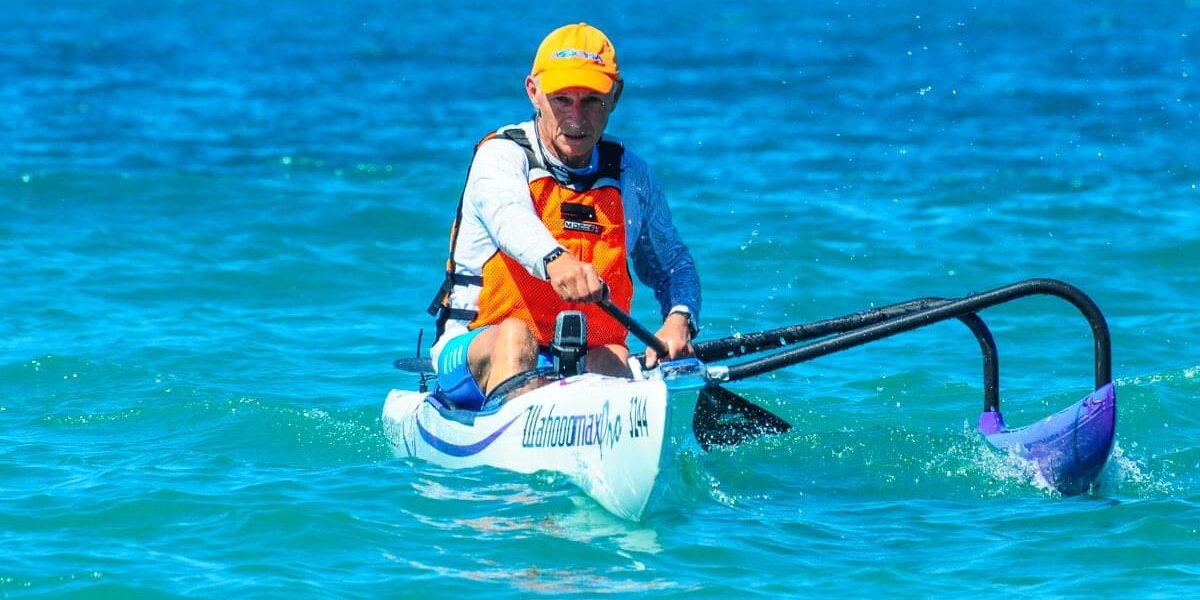 ‘Are you insane?’ was a comment I got when I stepped out of my OC1 at Port Douglas beach after paddling some 42km from Yorkey’s Knob.

I don’t consider myself insane but I do treat this race as a special type of challenge especially this year as I am not aware of any other platinum paddler completing the event in an OC1. The challenge is a test of paddling ability and also body management.

Conditions were looking great prior to the race with 15-20 knot SE winds and a good wind chop but unfortunately the wind died the day prior to the race. So on the morning of the event we were faced with a gentle smooth sea offering little in the way of assistance for OC1 paddlers. A few bumps popped up from time to time but generally the route was smooth resulting in generally slow times for OC1s.

I have done this race regularly and others of a similar distance so I was confident I could finish. My rule of thumb in preparation is to build up my distances over the previous weeks so that by about 3 weeks out from the race I will accumulate about 80km in a week. That, together with one or two long runs (ie Mooloolaba to Noosa with Brownie and Bill was an epic run), and a gradual taper sets me up.

However, such long races, and this one in particular, is more than just building up the distance.

To last and not fade too much in the race I need to fuel up. This comes in the form of carbo-loading by eating lots of the right stuff the day or two before, a good breakfast and by taking on board 2.5 litres of my favourite sports drink.

Equally important is dealing with the sun and heat. This can be a challenge as acclimatizing in winter is not easy but I have spent several decades in environments hotter and more humid locations ie Hong Kong and the Pacific. I have absolutely no doubt that the way to keep cool and prevent overheating is by covering up with a wetted long sleeved top and a hat. On this occasion I even wore my lifejacket and felt comfortable throughout the race.

Now all I needed to do was to paddle for a total of 4hr and 38 mins. Whilst there are always lots of craft on the start line, after about an hour and a half it seems as if you are the only one on the water so it can sometimes be tough to remain motivated. Some paddle to music, other paddlers dissociate themselves from the effort. I tend to focus on the paddling stroke continually looking at ways to go faster or further with no extra effort i.e. different angle on waves or tweaking each stroke. 4 1/2 hours on a canoe thinking about what is happening can reveal some interesting thoughts and this was no exception. (more later)

From time to time I encountered other craft, cruising past an OC6 about half way through and then about 5km from home I saw Bill Ridderhof ahead of me. That was an incentive for me to ramp up and I caught him with 2km to go but it wasn’t Bill, Wait a mo, there he is another 400m ahead so off I go again but before I could catch him I realised it wasn’t Bill either. Then with about 500m to go I came alongside an OC6 and managed to pass that canoe before the finish line. A great way to finish and I could even walk and carry my canoe at the end.

Thanks again to the Hekili Club for hosting the event in these difficult times and also for putting on the after party. I hope we can encourage more Noosa Paddlers to do this race next year but I suggest if anyone is interested they sign up for the Marlin Coast Challenge in October which is run over the same course but is a relay event.