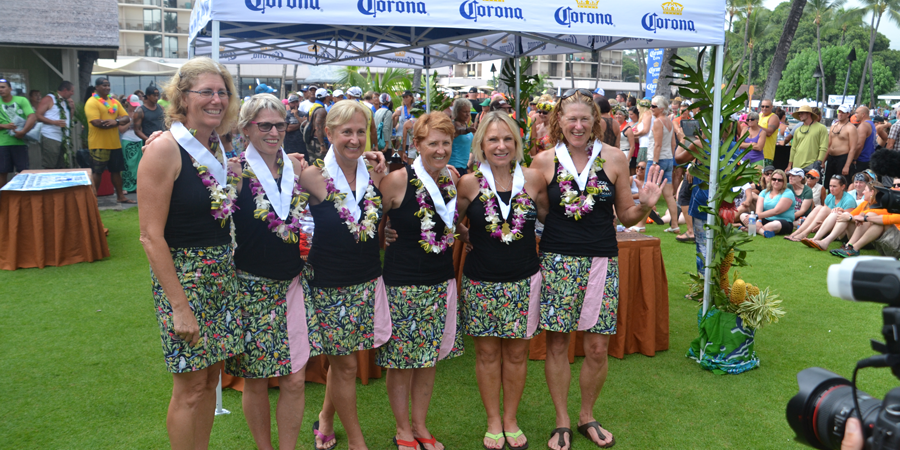 Teams from Noosa Outrigger Canoe Club enjoyed yet another successful race campaign in Hawaii recently. The annual Queen Lili’uokalani race weekend was held once again at Kona on the Big Island of Hawaii.
The Host club, Kai’Opua, bill this as the world’s largest canoe race due to the huge number of canoes on the water at any one time. There can be up to 150 canoes in the race. Paddlers male and female of all ages come from all over the world to participate in this spectacular race.
With 3 hurricanes passing around the island group only days before the race and a forecast of yet another coming in, there was concern about what was in store for us on race day. The hurricanes did upset the weather patterns and the trade wind refused to blow, making conditions for the whole week extremely hot and humid.
The Queen Lili’uokalani race start line is in a great location just in front of the famous King Kamehameha hotel where some of the team stayed. Come race day the excitement and adrenaline started to kick in as the paddlers realised they were finally here for the race they had trained so hard for back home, under the expert guidance of coach Des Mabbott.
At 8.30 am on Saturday 5 September, all the women’s teams were lined up to race down the coast. This flat out race of about 2 to 3 hrs finishes at Pu’uhonua o Honaunau National Historical Park, which is one of the most significant traditional Hawaiian sites in the islands.
The Noosa Lorikeets, steered by Chris Mitchell, got away to a great start and our girls, Wendy Mabbott, Rhonda Crockford, Cecily Ridderhof, Dee Mooney and Pip Kay maintained a great rhythm in the canoe to cross the line in in a time of 2hours 32 mins. This placed the girls 49th out of a total of 123 women’s crews, an extremely creditable effort. Their commitment and achievement were rewarded as they left the water and the coach presented them with flower leis. Later the result proved to be even better as they realised that they had achieved third spot in the 55-59 age group, and won a beautiful bronze medal.
The men’s event started after all the ladies teams had finished, with the race in reverse and finishing at the Kamakahonu, the location of the King Kamehameha Hotel. Canoe exchange presented an interesting obstacle whereby the men jump into the water off the edge of a lava field and swim out to the ladies who had just finished racing.
When the men’s race finally got underway, the team had planned a direct line to the finish, out wide from the shoreline hoping to keep away from adverse currents and other canoes. It did not exactly work out that way as the extreme heat, lack of wind and the moving current played havoc with the team’s rhythm they trained so hard with back home. The men’s race started about 11:30 am, and this meant no respite from the sun and danger of dehydration, but the crews had come prepared.
Over-heated and exhausted the Noosa Loggerheads team of Bill Ridderhof, Ken Mitchell, Bob Edmonds, Brian Rogers, Harry Crockford and Des Mabbott finally crossed the line in 2hrs 37 mins. As there was about half the fleet behind them, they had no idea how they had done in their 60 –64 age division.
Later at the presentation they were delighted to hear that they had secured a silver medal coming second in their age group. It was a real bonus to know that their canoe crossed the line ahead of crews half their age.
On the following day the V 12 races were held. In these races two canoes are rigged together so the team consists of 12 paddlers all pulling together. The Loggerheads and Lorikeets teamed up and although their average age worked out about 60, they came fourth in the 40+ age group division. Unfortunately that was the oldest division available in the mixed event. No medals attained but it was yet another stirring performance from the crews.
For all outrigger paddlers, especially in the early part of their paddling careers, the Queen Lili is definitely one to target and next year we are sure to see the return of some Noosa teams.
As the coach said, the results were more than we dared hope when we started our training over the winter. The crews weren’t hand-picked, but group’s of friends from NOCC who wanted to do the race and enjoy the experience. However, the results just show what can be achieved by a group of paddlers all willing to work together in harmony.
If you would like to get into this great sport of Outrigger canoeing check us out at www.noosaoutriggers.com.au