Noosa paddlers head across the ditch for a marathon in Takapuna 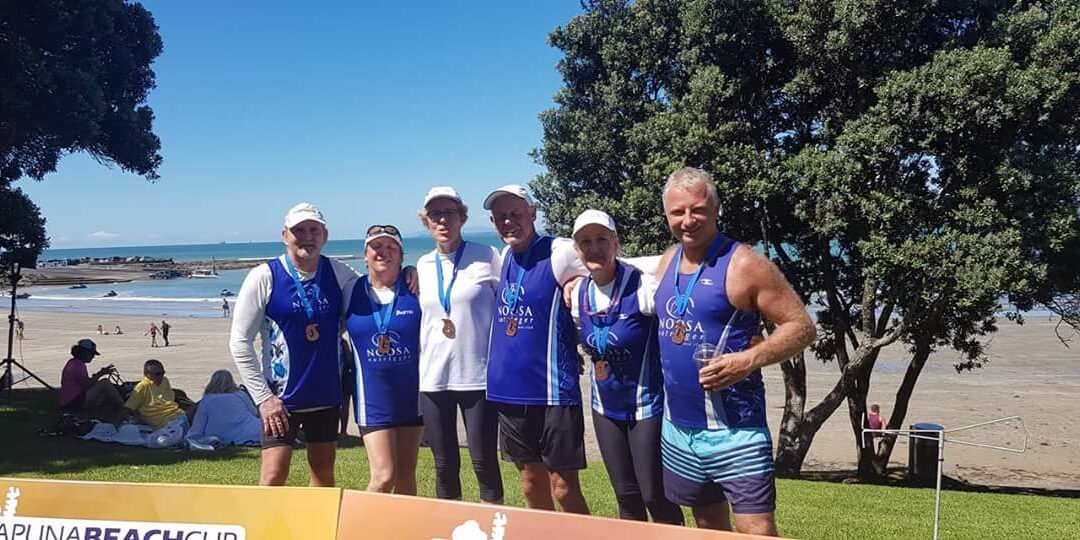 A favourite venue of Noosa Outrigger Canoe Club is Takapuna, on the north shore of Auckland, New Zealand. This is the home of Taniwha Outrigger Canoe Club and the site offers a perfect location for outrigger racing, so with some excitement four Noosa teams travelled to the land of the long white cloud to test themselves against our Kiwi cousins.

The event was held over three days, with day one very much a fun race of 5km, for the familiarisation of canoes and conditions, especially for teams outside of New Zealand who rarely get to paddle their type of six-man canoes called mahi-mahis.
Saturday was the big day with a number of race distances on offer. Conditions were calm and overcast, but the spring tide made for a slow run.  All crews performed admirably.
The 18km race was entered by Noosa’s Senior Master Mixed (50-60 years) crew, ‘The Dream Team’, consisting of Lysette Van-Dooren, Nerilee Arnett, Mary-Ann Chaffey, Bob Hobart and John Henry, steered by Roger Chaffey.  They competed in the Master Mixed division as there weren’t enough senior paddlers for their age division, and they came a very respectable fourth.   Their overall time was 1 hour 44 minutes and 21 seconds.

The longer 35km iron race was entered by the Senior Master Mixed crew, ‘The Philharmonics’, with Wendy Mabbott, Tina Standish, Bodo Lenitschek, Bill and Cecily Ridderhof, steered by Phil Bensted, and the Golden Master Men (over 60 years) ‘The Night’s Watch’, consisting of Des Mabbott, Colin Barker, Harry Crockford, Greg Moore and Don Smith, steered by Marco Rocco.  The Philharmonics placed second in their division in a time of 3 hours 41mins and 38 seconds, and the Night’s Watch had to race a division down into the Senior Master Men’s category as there was a limited number of 60+ crews, but they still came second in that division, in 3 hours 25 minutes.

The 45km changeover (relay) race was contested by Noosa’s own Open Men’s crew (30-40 years), also known as ‘The Loggerheads’.  In this race, a total of nine paddlers take turns in paddling and resting on board a support boat with frequent changeovers.  The Loggerheads managed to place sixth in this very competitive division, with a time of 3 hours 36 minutes and 25 seconds. You can follow the intrepid campaign of this crew, simply go to Noosa Loggerheads on Facebook and Instagram.

The following day was devoted to junior and relay races on single craft.  Large numbers of paddlers like to enter this race but unfortunately the availability of canoes is always an issue. Des and Wendy Mabbott are regular attendees at this event and maintain contact year to year so were fortunate to acquire a canoe for the event. This is one outrigger event that has some spectator appeal as the course is 4km and each member of a relay team of two completes three laps with a handover back at the beach whereby the incoming paddler jumps off the canoe, runs for a short distance over a timing mat to return to the canoe to tag their partner.  With well over 100 canoes at the start, the first change was a bit frantic but this soon settled down as the fleet spread out.  After 35km of paddling the day before, arms and backs strained to complete 24km but the Noosa dynamic duo of Des and Wendy Mabbott, who won this division last year, again won gold in the Golden Master Mixed division, in a total time of 2 hours 30 minutes.

These were a great set of results to complete the Takapuna campaign and a good way to prepare for the Sydney Harbour Challenge the following weekend.